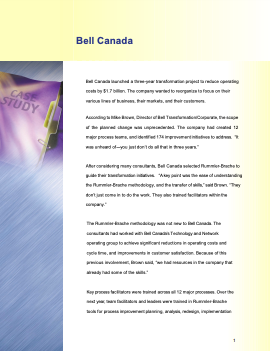 Bell Canada launched a three-year transformation project to reduce operating costs by $1.7 billion. The company wanted to reorganize to focus on their various lines of business, their markets, and their customers. According to Mike Brown, Director of Bell Transformation/Corporate, the scope of the planned change was unprecedented. The company had created 12 major process teams, and identified 174 improvement initiatives to address. “It was unheard of-you just don’t do all that in three years.” After considering many consultants, Bell Canada selected Rummler-Brache to guide their transformation initiatives. “A key point was the ease of understanding the Rummler-Brache methodology, and the transfer of skills,” said Brown. “They don’t just come in to do the work. They also trained facilitators within the company.”

The Rummler-Brache methodology was not new to Bell Canada. The consultants had worked with Bell Canada’s Technology and Network operating group to achieve significant reductions in operating costs and cycle time, and improvements in customer satisfaction. Because of this previous involvement, Brown said, “we had resources in the company that already had some of the skills.” Key process facilitators were trained across all 12 major processes. Over the next year, team facilitators and leaders were trained in Rummler-Brache tools for process improvement planning, analysis, redesign, implementation planning, measures development, role responsibility and job design. “The Rummler-Brache performance model, which analyzes performance at the organization level, the process level and the job level, was especially helpful,” Brown said. “The three levels gave us insight into all the areas you have to take into account.” Links among the core processes were identified and established through the creation of “current” and “future mode” process relationship maps. Rummler-Brache and Bell facilitators identified the “disconnects” among the many projects and brought them into alignment. As Brown noted, “With 174 projects, it’s a laborious effort to develop interconnectivity.”

Barbara Szabo, a Master Facilitator at Bell Canada, noted that the Rummler- Brache process improvement methodology “keeps everybody focused on how we do the work. It helps employees understand the changing expectations and redefined jobs. ”The Rummler-Brache process is very disciplined. For example, the repair process was reduced from five steps to two steps. Where formerly several employees were involved in the steps of answering calls, testing lines, and dispatching repairmen, “it is now all done by one person, except the actual repair,” she said. “The way people do the work changes dramatically.”

John Nelson was trained as a Rummler-Brache facilitator and has held various positions at Bell Canada. “Every time I start a new job, I apply the processanalysis and process improvement tools and techniques I learned from Rummler- Brache. These tools are invaluable in establishing strategic direction and then in determining how to implement it.” Rummler-Brache consultants have also worked with Bell management to develop performance logic maps which are aligned and integrated with a new performance measurement system. A Rummler-Brache facilitated performance management system defines the changing roles of managers in monitoring, analyzing and taking action on ongoing performance. With 6 months to go until scheduled completion of the Bell Transformation, Mike Brown said, “Overall, the major targets will be met.

Rummler-Brache prepared us well for implementation, and we have integrated the implementation of the projects that have relationships to each other.“We have collectively moved to become a process-centric organization with an intense focus on customers. We've turned the corner on understanding that we manage the business by managing the processes.”