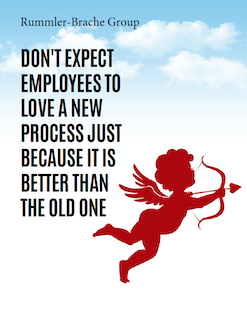 Process re-designers often bank on the idea that everybody will buy into proposed changes just because they make good economic sense. But that rarely happens. People don’t automatically fall in love with a nice process, even if it’s brilliantly designed.

That’s understandable. Just consider what all we’re asking people to do here. Comfortable and familiar ways of doing business must be ditched. Working relationships will get reshaped. The boundaries between departments need to come down. Power and authority among different functions and across levels will be redistributed. People face new performance requirements that call for new skills, different work habits, and a shift in mindset.

We’re talking about serious change. And it triggers an array of very human, very predictable reactions.

You’ll be dealing with feelings such as anger, confusion, fear, and uncertainty that generate a lot of resistance to change. In fact, it’s these people and organizational issues, not the technical aspects, that present the major challenges. The behavioral side of things will be as important to address as the structural aspects. And actually more difficult to deal with. Nevertheless, one of the most common mistakes is to underrate people’s need to develop new mental models and behavioral competencies.

The result? Implementation efforts often drag. Maybe they fail completely,simply because not enough time and money are invested to change people’s thinking, attitudes, and behavior. This sabotages the chance for the desired changes to take root. Unless people’s beliefs and behaviors are altered significantly, structural process changes simply won’t be institutionalized.

You’ll also need to align jobs with processes. Make sure that people’s work is designed to support the different process steps, because organization and process improvements won’t stick if they aren’t built into jobs. So ask yourself how the new process stacks up against the abilities of the people who will be affected. Can they carry out the steps? Can they perform their new responsibilities?

If you decide that the process is doable, then make sure the people understand how their jobs are going to change. For example, will they have to start using new software?

The people and organizational issues, not the technical aspects, present the major challenges.

Fill out different forms? Work as a member of a crossfunctional team? Make higher-level decisions than they did before? Next, determine how their performance measures and goals are going to change. For example, will they now be measured on customer satisfaction? On how well they function as a team?

Everybody deserves to know what’s going to change, how they’ll be affected personally, and what they must do to measure up in the new scheme of things. They’ll need resources and tools. Training. Constant communication and good feedback.

Process improvement implies change. And becoming a processdriven organization is a big change.

If people are expected to support the new process, their own new behaviors must be supported by management. We’re wasting our time trying to improve workflows unless we also make changes in people’s jobs, the work environment, and the way we manage them.