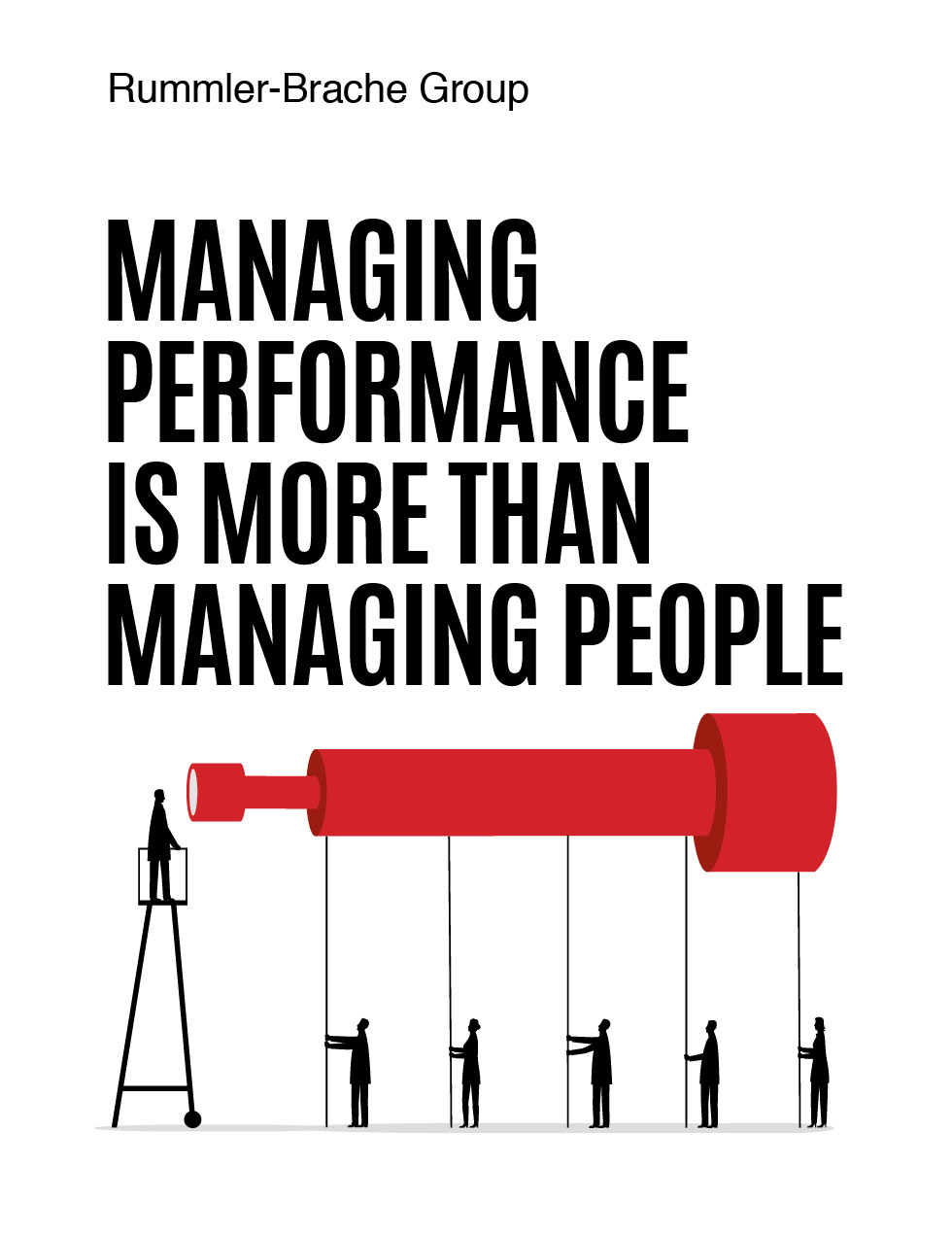 Excerpt from the article Managing Performance is More than Managing People by Alan Brache:

Efficient and effective performance comes from the systematic management of all five parts of the Performance System.

An increasing number of practical tools are available to help managers address such responsibilities as strategy formulation, problem-solving and decision making, planning, budgeting, and information retrieval/management. However, people management techniques tend to be heavy on theory and light on practicality, heavy on gimmicks and panaceas and light on tools for specific human resource management needs. This gap in the technology of management is understandable. People are more variable, more complex, and less predictable than other dimensions of a manager’s responsibility. Given these characteristics, it is easy to dismiss human performance management as purely an art form.

To address the issue of whether managing people is indeed an art that cannot be learned, let us analyze those rare managers who appear to have been born with human resource management savvy. Rather than attempt to determine whether their expertise arises from their values, their schooling, their work experience, or their astrological sign, let us examine both the human performance truths that they tend to use as a guiding philosophy and specific techniques they use to address performance issues.

THE FUNDAMENTAL TRUTHS OF PERFORMANCE

Successful managers tend to be guided by a set of fundamental truths about human performance:

The Performance “Engine”: An Analogy

The third and fourth truths indicate that performance should be seen as the output system. Let us compare the human performance system to an internal combustion system in an automobile. In both cases, performance occurs only through the interaction of a number of components. Just as the spark plugs are only one component of the internal combustion system, the performers, or people doing the job, are only one component of the performance system. Only a poor engine troubleshooter would assume that any automobile problem was due to a spark plug deficiency. Only a poor performance trouble-shooter would assume that any productivity problem was due to an employee deficiency. If a mechanic replaces, cleans, or adjusts the spark plugs and installs them to an engine that has other components that are deficient, the car’s performance will continue to be substandard. Similarly, if workers are replaced, trained, or “motivated” and placed in an environment in which other components are deficient, performance will continue to be less than optimal.

What are the components in this performance system? To illustrate, let us consider this situation:

A group of software developers is responsible not only for programming, but also for conducting surveys that identify needs within an organization. They have been doing a fine job of programming. However, they rarely conduct user surveys and when they do the survey results are usually superficial, disorganized, and lacking analysis or interpretation.

Every output is the result of the interplay of the input, the performer, the consequences, and the feedback. The effective performance manager views the software developers’ performance through the window of this performance system and analyzes and finet-unes each of the four components that contribute to the output.

Our experience with public and private sector organizations in the United States, Canada, Latin America, Europe, and Asia has shown that those unusual managers who naturally excel at optimizing both productivity and job satisfaction tend to follow a systematic process. While most are initially unaware of the technique they use, they diagnose the performance system much as effective medical doctors and mechanical troubleshooters diagnose situations prior to implementing a solution. Their diagnostic technique is a simple one.

They ask the right questions. In our software developer example, these questions would include:

Have the specific outputs of the software developer’s user survey responsibilities been clearly communicated to them?

Have clear expectations regarding the quality and timeliness of user survey outputs been communicated? Do the software developers have sufficient resources—time, administrative support, forms, etc.—to conduct and analyze user surveys?

Do the software developers know why user surveys are important?

Do they know how to conduct and analyze them?

Do they have the physical, emotional, and mental ability to conduct user surveys?

Do the software developers receive few, if any, negative consequences for not conducting a user survey or conducting one superficially, in a disorganized format, or without analysis?

Do the performers receive information from anywhere in the organization on the quality or quantity of their user survey performance? If they do receive this type of information, is it timely, specific, understandable, balanced (positive and negative), and constructively delivered?

If the answer to any of these questions is “no,” a performance system weakness has been unearthed and logical follow-up questions would pinpoint the specific deficiency. For example, the soft ware developers may not have any standards for the quality or timeliness of user surveys. Or, they may lack the administrative support needed for the organization of reports. If so, the input component of the system is deficient. Perhaps they don’t know how to write a report in the correct format. If so, the performer component is deficient (which in no way indicates that the soft ware developers are at fault). If the software developers ignore the surveys or do a superfi cial job, they may be rewarded by having more time for their programming work, which is more organizationally visible and which is monitored more closely by management. Conversely, the soft ware developers who do a thorough user survey may be criticized for falling behind in programming. If the environment supports undesired responses in this way, the consequence component is deficient. Or perhaps they never hear what happens to the user survey data that they do analyze and submit to management.

If so, the feedback component is deficient.

It is no coincidence that most of these potential deficiencies are external to the performer. In most organizations with which we have consulted, more than 80% of performance problems/opportunities are environmental in their own origin. Th is high percentage does not ignore morale, attitude, and motivation as possible performance impediments. It reflects the fact that the performance system approach probes beyond these popular—and unspecifi c—labels to explore the reasons for these real concerns. In most cases, unclear job definition or standards, job interferences, inappropriate consequences, absence of, or deficient feedback and lack of skill or knowledge are at the root of motivation and morale deficiencies.

To bring about positive change in a performance system in either a problem or non-problem area, the improvement actions must address the deficiencies identified in the diagnosis. To improve user survey performance in our example, the programming managers need to ensure that the software developers’ performance system has the following characteristics:

The manager’s responsibility for managing people becomes far less mystical when defined as the process of ensuring that performance systems at all levels have these characteristics. Installing the characteristics in an organization and then making them an integral part of day-to-day operations is not an easy challenge, but it is one which is within a manager’s control. To ignore them is to gamble with performance and not manage it.

In addition, each of the skills required—clarifying expectations, removing interferences, structuring appropriate consequences, and providing feedback—can be learned by a manager. While many managers have created job settings with many of these characteristics, most lack a structured approach to building an environment that encourages optimum productivity. Th e performance system management process provides that structured approach.

While the performance system approach is not a panacea, it does bring a rational approach to an area—managing people—that is often dealt with unsystematically. No technique can, or should ignore the fact that individuals are unique, highly complex, and motivated by a variety of different factors. This multi-faceted complexity demands a structured performance management process. Th e consequences of unsystematic people management can be catastrophic.