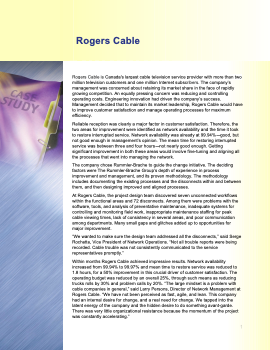 Rogers Cable is Canada's largest cable television service provider with more than two million television customers and one million Internet subscribers. The company’s management was concerned about retaining its market share in the face of rapidly growing competition. An equally pressing concern was reducing and controlling operating costs. Engineering innovation had driven the company’s success. Management decided that to maintain its market leadership, Rogers Cable would have to improve customer satisfaction and manage operating processes for maximum efficiency.

Reliable reception was clearly a major factor in customer satisfaction. Therefore, the two areas for improvement were identified as network availability and the time it took to restore interrupted service. Network availability was already at 99.94%-good, but not good enough in management’s opinion. The mean time for restoring interrupted service was between three and four hours-not nearly good enough. Getting significant improvement in both these areas would involve fine-tuning and aligning all the processes that went into managing the network.

The company chose Rummler-Brache to guide the change initiative. The deciding factors were The Rummler-Brache Group’s depth of experience in process improvement and management, and its proven methodology. The methodology includes documenting the existing processes and the disconnects within and between them, and then designing improved and aligned processes.

At Rogers Cable, the project design team discovered seven unconnected workflows within the functional areas and 72 disconnects. Among them were problems with the software, tools, and analysis of preventative maintenance, inadequate systems for controlling and monitoring field work, inappropriate maintenance staffing for peak cable viewing times, lack of consistency in several areas, and poor communication among departments. Many small gaps and glitches added up to opportunities for major improvement.

“We wanted to make sure the design team addressed all the disconnects,” said Serge Rochette, Vice President of Network Operations. “Not all trouble reports were being recorded. Cable trouble was not consistently communicated to the service representatives promptly.”

Within months Rogers Cable achieved impressive results. Network availability increased from 99.94% to 99.97% and mean time to restore service was reduced to 1.8 hours, for a 50% improvement in this crucial driver of customer satisfaction. The operating budget was reduced by an overall 25%, through such means as reducing trucks rolls by 30% and problem calls by 20%. “The large mindset is a problem with cable companies in general,” said Larry Persons, Director of Network Management at Rogers Cable. “We have not been perceived as fast, agile, and lean. This company had an internal desire for change, and a real need for change. We tapped into the latent energy of the company and the hidden desire to do something avant-garde. There was very little organizational resistance because the momentum of the project was constantly accelerating.”

Persons was surprised by the ease and speed with which the project moved. “The team came together and moved in exponential steps. It just caught fire. We finished the design phase in August and got the go ahead to build four network centers across the country by December. The company decided to do it and it got done.”

Persons attributes the success to the fact that Rummler-Brache facilitated the project, but company employees made the change happen. “All the teams reported back to the executive committee, not to the Rummler-Brache consultants. You would have to put your name and your reputation on the line. It was always the team making the pitch to the highest levels of the company.”

“The Rummler-Brache consultants made it really cross-functional. We became a real team, where people began to trust and respect the other guy’s opinion. Informal communication improved up and down the chain of command. We used every information channel we could-400 people were involved within a month-and that had a lot to do with the success.”

The Rummler-Brache Process Improvement Methodology provided the framework for bringing about change, and the consultants “never took their eyes off that framework. They kept bringing us back to the original disconnects and going down deeper and deeper into detail. The Rummler-Brache approach is very focused and disciplined,” Rochette said. “It’s enabled us to a achieve a lot of success in a short period of time. We still have issues to resolve, but the foundation is there.”

Rochette emphasized, “What has been most valuable, and what paves the way for all future improvements is that Network Operations people now have a process mindset, and an understanding of how all processes must be linked together.”

“People talk process, understand process, and behave in sync with process,” he said.  “It’s people who make processes work. It’s the people involved who make change happen. This methodology creates a teamwork approach. This holistic, aligned view has changed employee’s idea of who the customers are-both the internal and external customers. It has changed their idea of the supplier’s role. And it’s changed their idea of what is important.”

Rochette pointed out “We didn’t have a good measurement system before. Now we know how to measure processes and what critical elements we should measure. This has shown us how to focus on what is important.”

“This was the first big project of many big projects,” Larry Persons declared.  “It set the stage and taught people what process was all about.”